Chairman of the Board of Directors and the Executive Committee

M. İlker Aycı, born in Istanbul in 1971, is 1994 alumni of Bilkent University’s Department of Political Science and Public Administration. After completing a research stay on political science at the Leeds University in the UK in 1995, Mr. Aycı completed International Relations Master’s program at the Marmara University in Istanbul in 1997.

In his professional career which started in 1994, Mr. Aycı held a variety of positions at Kurtsan Medicine, Universal International Trade, and the Metropolitan Municipality of Istanbul, where, as an advisor to the then Mayor of Istanbul, H.E. Recep Tayyip Erdoğan, he took part in a number of development projects realized in Turkey’s largest city. In the insurance sector, Mr. Aycı became the General Manager of Başak Sigorta in 2005. After the company’s successful privatization, Mr. Aycı took over the management of Güneş Sigorta, one of the largest insurance companies in Turkey, in 2006. As the General Manager until 2011, he considerably increased both the value and size of the company.

In 2011, Mr. Aycı became the President of the Investment Support and Promotion Agency of Turkey (ISPAT), the only official national body to promote Turkey’s investment environment globally and to assist international investors in their investment projects. Between 2013 and 2015, Mr. Aycı also held first the Vice Presidency and then, the Presidency of the World Association of Investment Promotion Agencies (WAIPA), the umbrella organization of over 170 investment promotion agencies from 130 countries.

Since 2015, Mr. Aycı is the Chairman of the Board of Directors and of the Executive Committee of Turkish Airlines. Currently, Mr. Aycı is also the Chairman of the Service Exporters' Association of Turkey and serves as a board and audit committee member of the Turkish Football Federation, the chair of the board of Turkish Airlines Sports Club.
Mr. Aycı is also the Turkish Airlines representative of the Turkey-USA, Turkey-Canada, Turkey-Brazil and Turkey-UK Business Councils, as well as an Executive Board member of the Turkey-USA, Turkey-Brazil, and Turkey-UK Business Councils under the Foreign Economic Relations Board of Turkey (DEİK). Additionally, Mr. Aycı held positions at different capacities in several organizations including the Insurance Association of Turkey, the Turkey-China Business Council, Vakıf Emeklilik, and Güneş Sigorta Sports Club. Mr. Aycı speaks English and Russian.

Prof. Dr. Mecit Eş, born in 1953 in Samsun; received his degree from the Istanbul University School of Economics in 1974. Having held several offices, he commenced his academic projects and received his Doctorate in 1985. He became Associate Professor in 1990 and Professor in 1996. And having then worked at Dumlupınar University from 1992 and 2012, Mr. Eş continues his academic studies as a Professor of the Academy of Commercial Sciences at Istanbul Commerce University. He has published many books and articles, and is married with three children.

Member of the Board and the Executive Committee

Born in 1980 in Karaman, Mr. Arda Ermut graduated from Bogazici University’s Department of Politics and International Relations in 2004.

He was appointed as a Media and Public Relations Consultant at the Prime Ministry Office in Istanbul Dolmabahce in 2005. He took part in the establishment of the Prime Ministry Investment Support and Promotion Agency of Turkey (ISPAT) as a Project Director in 2007 and progressed through various leadership roles at the Agency in the following years. He led teams in charge of the Middle East and Southeast Asia regions. Prior to his appointment as President of ISPAT in May 2015, Mr. Ermut held the ‘Advisor to the President’ and ‘Vice President’ titles and served as the Head of Public-Private Partnership Department at ISPAT. In August 2018 Mr.Ermut was appointed as the first President of the Investment Office of Turkish Presidency. During his tenure, he has actively led processes for facilitating the realization of various foreign direct investments into Turkey.

Mr. Ermut also served as a Board Member at Türkiye Wealth Fund between 2018 and 2020, and was appointed as a Board Member for Turkish Airlines in June 2019.  He also serves as one of the three members in the Turkish Airlines Executive Committee. In addition to these, Mr.Ermut was elected to the Board of the Turkish Basketball Federation in October 2016,  in which he was appointed as a Vice Chairman in April 2019.

Mr. Ermut is fluent in English, and is married with two children.

Member of the Board and General Manager

Born in 1968 in Rize, Bilal Ekşi graduated from Yıldız Technical University, the Department of Electronics and Communications Engineering in 1989. Starting his career in 1989, Mr. Ekşi worked as an Electronics and Communications Engineer at Turkish State Railways and thereafter, he was assigned to the position of Workshop Manager at Istanbul Ulasim A.S., and he played an active role in realization of significant transport projects.

As the Head of Overhaul Workshops at Turkish Airlines Inc., Mr Ekşi carried out the duty of maintenance of aircraft engines, landing gears and all components between 2003 and 2005. In 2005, he has been assigned as the Chief Ground Operations Officer at Turkish Airlines Inc. Mr. EKŞİ accomplished significant projects, particularly in improvement of the on-time departure performance during his tenure.

Having served as the Chief Production Officer at Turkish Technic in 2008 and 2009; and as the CEO of Cyprus Turkish Airlines as part of the reorganization of Cyprus Turkish Airlines in 2010; and as the Executive Vice President at "Turkish Engine Center (TEC)", established by the Joint Venture of Pratt Whitney, the American Engine manufacturer, and Turkish Technic Inc. between 2010 – 2011; Mr. Ekşi was assigned as the Director General of Turkish Directorate General of Civil Aviation in April 2011.

During his tenure as the Director General of Turkish Directorate General of Civil Aviation, Turkey has been reelected as a member of Council of International Civil Aviation Organization (ICAO) 66 years later its pervious membership and has become one of the 36 members in ICAO’s decision-making platform.

Member of the Board

Captain Mithat Görkem Aksoy was born on June 6th, 1977 in Antalya. He started his flight training in 1996 and graduated from Turkish Aeronautical Association  in 1998 and worked until 2001. In 2001, he started flying at private airlines. After serving in couple of private airlines, he started Turkish Airlines in 2007. He flew different types of aircraft such as  G4, G550 , B737 and A330- A340. In 2016, he was promoted as SVP, General Aviation VIP Fleet Operations. He is currently serving as captain pilot at Turkish Airlines.

Member of the Board

Born in Kemah, Erzincan in 1958, Mr. Birdal completed his primary and high school education in İstanbul. In 1980, he graduated from the Istanbul Academy of Economics
and Commercial Sciences College of Journalism and Public Relations, and in 1990 completed his graduate degree from the Social Sciences Institute of Marmara University.

In 1982, he took his first step in the aviation sector by starting as an air traffic controller at the Atatürk Airport, incorporated under the General Directorate of State Airports Authority (DHMI). Later on, he carried out various duties, such as air traffic controller and Airport Manager in Erzincan, Directorate of Nevşehir Kapadokya, Trabzon and İzmir Adnan Menderes Airports and Senior Vice President of Airport Operation Department of DHMI.

After working as the Deputy Director and Member Of the Board of Directors of DHMI in 2003, he assumed the position of General Manager and Chairman of the Board Directors of DHMI between 2007-2015. Following his position in DHMI, Mr. Orhan Birdal was appointed to the Undersecretariat of the Ministry of Transport, Maritime Affairs and Communications. By the end of 2015, he started to serve as Deputy Undersecretary responsible for Aviation and Railroads.

During his tenure as the General Manager of DHMI, he also served as the Member of the Board of Directors and Auditing Committee of Turkish Airlines, between 2008-2012. Besides, he also served as the Vice President of the Turkish Civil Aviation Council of the Union of Chambers and Commodity Exchanges of Turkey (TOBB).

Mr. Birdal actively participated in the commission of Domestic Aircraft Project in Turkey. He also served as Chairman of Aviation Sector and moderator in 10. And 11. Transportation Council.

Mr. Birdal granted several awards including Bureaucrat of the year and Goverment Executive of the Year by domestic and international institutions.

Mr. Birdal speaks English, and is married with four children. 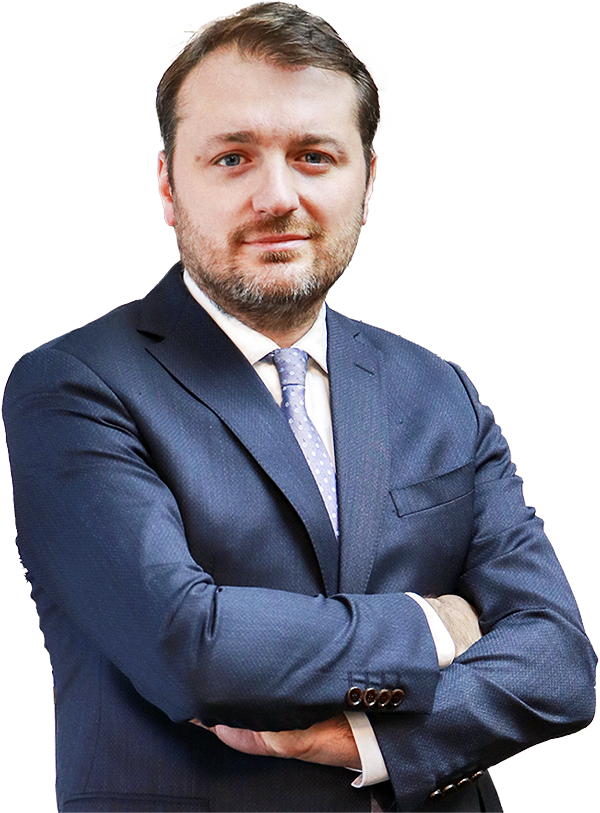 Born in 1962, Mr. Akpınar graduated from Saint-Michel French High School and the Bosphorus University Department of Management Science. His professional career commenced in 1986 when he became the founder shareholder of Penta Textile. In 1993 he was appointed CEO of KVK Mobil Telefon Hizmetleri A.Ş.. Subsequently, Mr. Akpınar served as the CEO of MV Holding A.Ş. and played an active role in the creation of Fintur Holding BV. Between the years of 2002 and 2006, Mr. AKPINAR served as the CEO of Turkcell. He remains an entrepreneur and investor in the fields of renewable energy, technology, chemicals and construction. Mr. AKPINAR is married and has two children.

Born in 1979 in Kocaeli, Fatmanur Altun received her Bachelor’s Degree in Sociology from Istanbul University. Between 2002 and 2003, she stayed in the USA to conduct research in various fields. She took her Master’s Degree in Sociology and Anthropology from Marmara University’s Institute of Middle East and Islamic Countries Studies with her thesis titled “The Role of Greater Middle East Project Discourse in Building Turkish Nationalism after 2000”.

Starting her doctoral studies at the same department in 2014, she earned her PhD Degree in 2018 with her dissertation titled “The ‘Social Benefit’ Approach of Secular and Faith-Based Non-Governmental Organizations in Turkey: Case Studies of the Association for Supporting Contemporary Life and Turkish Youth and Education Service Foundation”.

Working in the publishing sector as a translator and editor since 2000, Altun served as the department editor of Anlayış Magazine from 2005 to 2010 and as a columnist for the news portal World Bulletin from 2006 to 2011. She also served as an Executive Board member of AK Party’s Istanbul Provincial Organization from 2009 to 2012 and an Executive Board member of İstanbul Metropolitan Municipality’s affiliate company Kültür A.Ş. (Culture Co.) from 2012 to 2016. Since 2015, she has been working for Marmara University. Currently an academic in the Sociology Department of Marmara University, Altun has copyright and translation works. In addition to her seminars and conferences on different platforms, she is also a columnist for the Fikriyat Newspaper and her articles appear regularly on various media.